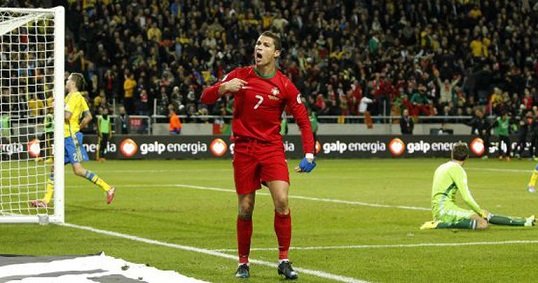 Fernando Santos’ side Portugal defeated Sweden 2-0 in the return of Cristiano Ronaldo, giving him his second victory in a Nations League. Ronaldo missed the first game of the League of Nations but he returned in the best possible way and became the first European football player and second in the world to score 100 international goals.

Ronaldo celebrated his 100th goal for Portugal when he scored straight from the free kick in the 45th minute of the first half. Juventus superstar carefully prepared the ball, aimed the goal, and beat the goalkeeper Olsen. Ronaldo added another and his 101st international goal with a magnificent shot from the edge of the area. This assist for him was provided by another youngster João Félix in the 72nd of the match.

Full Time
Portugal 2-0 Sweden
Sweden managed to hit only one shot on target whereas Portugal with eight.

68′ Joao Felix and Ronaldo played a clever one-two on the edge of the penalty area, the former almost locked the ball on the return ball, but Janssen brilliantly stopped him and won for the hosts a goal kick.

45′ GoaLLLL Cristiano Ronaldo with his 100th goal for Portugal

Portugal with 55% of ball possessio
Scoreline is 0-0

Sweden lost to France 1-0, Mbappe 90th minute goal destroyed Sweden to give France 3 points. Sweden needs to pick up three up points against Ronaldo’s Portugal if they are to stand strong in Group 3, which is getting difficult.

H2H record between Portugal and Swden

In 18 matches, Sweden holds the advantage with 7 wins.
Portugal has 5 wins and the remaining six are drawn.

Where to watch the match live?

Also Read: Ballon d’Or Without Messi and Ronaldo 2010 to 2020
Also Read: 10 most handsome football players that are loved by universal women

Also Read: Is it time for Ronaldo and Messi to go to Asia?
Also Read: Cristiano Ronaldo and Lionel Messi: Best Footballers in the history