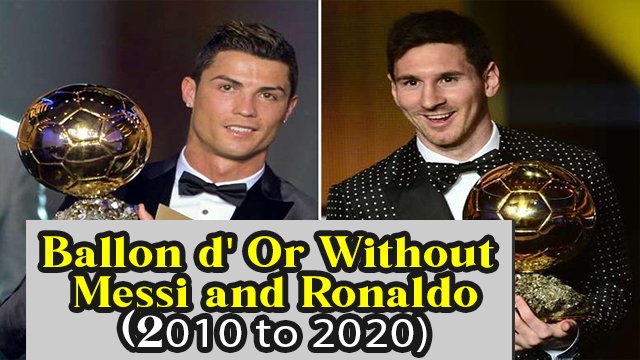 In the past ten years, Lionel Messi and Cristiano Ronaldo have won all Ballon d’Or awards, notably Luka Modrić’s victory in 2018.

Of course, each of their victories were well-deserved, but their dominance means that many good deserved players were also deprived of this award.

In 2010, Xavi was back to try and topple Messi and Ronaldo’s sturdy perch after another sublime season for Barcelona and with Spain National Team. But his friend, team-mate, and midfielder Iniesta helped Barcelona win another La Liga title in the 2009-10 season (the club only lost one league match). Iniesta came second in the Ballon d’Or voting after proving that the 2010 World Cup in Spain was indispensable. Iniesta played a huge role in Spain’s FIFA World Cup in South Africa 2010 and scored the 116th-minute goal in the final against the Netherlands.

Messi once again won the Ballon d’Or making Ronaldo behind. Barcelona won the La Liga and Champions League titles in the 2010/11 season and Xavi performed well in both competitions. Xavi scored 14 goals in 51 games for Barca, he also scored at the Nou Camp in Barcelona’s famous 5-0 defeat of Real Madrid. He once again ended the Ballon d’Or in third position for the third time in three years.

Bayern Munich, the German giants won the triple crown, and Ribery played an important role in every game and competition of the 2012-13 season. Even the treble of Bayern and Ribery was not enough to break the race of Ronaldo and Messi in Ballon d’Or. At the 2013 Ballon d’Or, Ronaldo finally broke Messi’s winning streak since 2009. The winger scored 16 goals in 39 games and Bayern won the Bundesliga, German Cup and Champions League.

Neuer was between the pole of a Bayern team that won the 2013-14 Bundesliga while conceding only 23 goals in 34 games. Manuel Neuer was ranked third in 2014 after Ronaldo and Messi. Neuer also made Germany the champion of the FIFA World Cup 2014. In the World Cup, he only conceded 4 goals in seven games and won the Golden Glove Award. The Portuguese superstar Ronaldo successfully defended the award of 2014.

The 2014-15 season is still said and believed as Neymar’s finest season as a professional player. Neymar would never have thought that after scoring 39 goals in 51 matches for Barca in all competitions and winning the La Liga, the Champions League, and the Copa del Rey he still couldn’t break the race of Ronaldo and Messi in Ballon d’Or. Neymar proved to be amazing in the club’s historical treble in that season. He scored in the Copa del Rey semis, one in the Copa del Rey final, three in the Champions League semi-final, and one in the final of the Champions League. The Brazilian superstar tasted his first loss to a deadly pair Leo. Cris. at Ballon d’Or. His teammate Lionel Messi won in 2015 with the trophies the same as Neymar.

Atlético Madrid’s superstar Griezmann’s scored a total of 22 goals in 38 games of La Liga 2015-16 season. Atlético finished third in the LaLiga table after Barcelona and Real Madrid. Frenchman also guided Atletico Madrid to the Champions League final where he scored two goals against Barcelona in quaters and one against Bayern in the semis.
In the 2016 Euro Cup, he scored 6 goals and provided 2 assists for France. France became runner-up after losing to Portugal 1-0 in the final. Portuguese superstar Ronaldo took the award of 2016.

Brazilian superstar Neymar’s final season in Barcelona was highlighted by the match-winning goal in the final of Copa del Rey 2017. In 2016-17 Neymar scored 13 Goals and 15 Assists in La Liga. He made heroic performance for Barca against PSG in the Champions League where Barcelona made  impossible 6-1 comeback victory. Blaugrana were 4-0 down in the first leg, Neymar scored 2 goals, provided one assist and earned a penalty. He scored a total of 20 Goals and made 27 assists for Barcelona before shocking the world by leaving Catalonia with $246 million for PSG.

Messi-Ronaldo’s era of winning Ballon d’Or was actually broken by Luca Modric in 2018. Modric truly and surprisingly won the Ballon d’Or, breaking Messi and Ronaldo’s race after a decade. Modrić made Real Madrid the champions of UCL 2017-18 defeating Liverpool in the final. He also led Croatia to the final of the 2018 World Cup before receiving the tournament’s Golden Ball award.

Virgil van Dijk‘s 2018-19 season went recording 21 clean sheets in the English Premier League. Virgil’s defending journey for Liverpool was progressed without being dribbled past for 539 days. He also played a massive role for Liverpool that won the 6th Champions League title almost after 14 years since their last win in 2005. With the Dutch national team, he played final of the first UEFA Nations League where he conceded only seven goals.

It was announced that since 1956, due to the impact of the coronavirus on the football season, the Ballon d’Or of 2020 was “canceled”. 2019-20 was an extraordinarily wonderful and memorable season for him. Lewandoski the superstar of Bayern Munich scored 55 goals and provided 10 assists in all competitions. There is no doubt that the 32-year-old Polish striker would have included his name on the Ballon d’Or list.
When the award approaches each year, there is usually a lot of debate about who should win the award. But 2020 was a year where Lewandoski was robbed of Ballon d’Or. Here’s why Lewandoski should have won the Ballon d’ Or 2020.