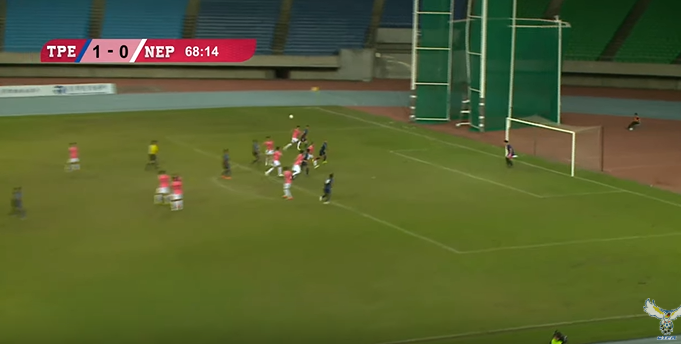 The Nepali national football team, with the first goal of young forward Abhishek Rizal, draw against Chinese Taipei 1-1 in a international friendly match.

In the match played at the National Stadium in Kaohsiung, Taiwan Abhishek scored header for Nepal in the 69th minute. Mid-fielder Santosh Tamang directing the ball through the free-kick. Both Santosh Tamang and Abhishek Rijal were in the starting eleven for the first time in Nepali Team.

Abhishek, who made his debut in international football in the match against Malaysia, scored for Nepal National Team just in his second match.

Chinese Taipei was strong in the game. They had taken the lead in 40th minute of the match. But Promising Abhisek Rijal scored debut goal for Nepal in the international friendly match against Chinese Taipei.  It was also first goal for Coach Johan Kalin under his coaching for Nepal National Team. Nepal was able to hold 1-1 draw against highly ranked (125) Chinese Taipei