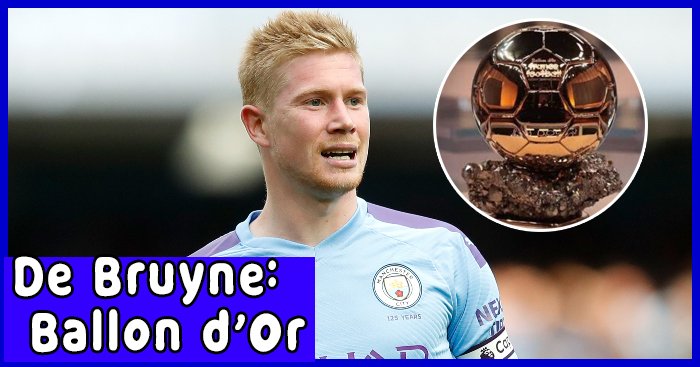 If Kevin De Bruyne continues on his current trajectory he could win the most prestigious award in football that is Ballon d’ Or. This award has been dominated by two best players in history; Barcelona star Lionel Messi and Juventus star Cristiano Ronaldo.

Manchester City midfielder Kevin De Bruyne is probably not too far from the Ballon d’ Or and in recent years he has become a “complete football player”. In the past few seasons, the Belgium international has been one of the best players in the Premier League.

Despite all his success at Manchester City and helping the club win the Premier League title in the past two seasons, Bruyne has yet to make it into the top ten of Ballon d’Or voting. The 28 years old has more than 200 appearances across all competitions for City, scoring more than 50 goals while establishing himself among the finest playmakers in Europe.

At the beginning of 2020, he said to Sky, “I may not be too far away. But who am I to decide that?”
“I just try to do my best. In the past few years, even last season, I have performed well and injured a lot, but on the field, I performed well. Even in Germany, I had a great time playing and I was very happy. I don’t know who decides (the best football player), but I think I’m very close.”

“In the past few years, I have been vying for the top 30 in the world. It feels good because you work very hard professionally and are recognized as doing well, and it is always nice.” Bruyne added

“Compared to a few years ago, I think I am more like a complete football player. I have had some good times in my career, both mentally and leading the team, I am more good than two or three years ago. I think I did a very good job, I am comfortable and satisfied with my performance.”

The predictions of 5 players who may win the Ballon d’Or in the next 10 years. After #Messi and #Ronaldo https://t.co/PVxVJH1dL0

Previous post After Messi and Ronaldo, these 5 footballers could dominate Ballon d’ Or

One thought on “Can Kevin De Bruyne win Ballon d’ Or after Messi and Ronaldo ?”